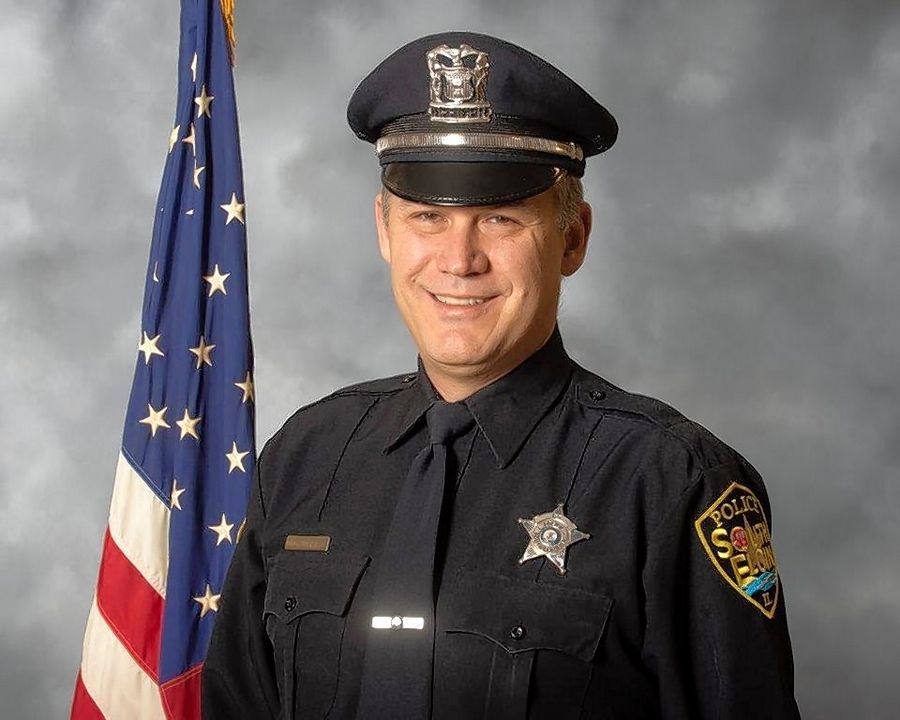 A South Elgin police officer who for a year was allowed to carry a gun only while on duty has been working under a “last chance” disciplinary agreement.

The officer, Shane A. Christenson, was disciplined after he violated an order to abstain from alcohol after he was indicted on domestic violence charges in Elgin. The charges later were reduced to disorderly conduct.

Christenson also was involved in two police traffic stops in Gilberts: A 17-minute stop involving two squad cars for which Gilberts police wrote no report, and a second stop hours later that led to the disciplinary agreement.

Kane County State’s Attorney Joe McMahon said his office was aware that Christenson admitted to a Gilberts police officer, as documented in a police report, that he had been drinking alcohol in violation of his bail when he was a passenger in the second traffic stop. Yet there were no consequences in court for Christenson.

In the earlier traffic stop, Gilberts officers filed no written report and issued no tickets, but South Elgin’s police chief later indicated in an affidavit that Christenson “may have operated a motor vehicle … while under the influence of alcohol” that night.

The Daily Herald pieced together information from public court records and documents obtained under the Freedom of Information Act from police in South Elgin, Elgin and Gilberts, Kane County Emergency Communications and the Illinois secretary of state.

Christenson, 47, initially was disciplined by the South Elgin Police Department in July 2017 after the domestic violence charges in Elgin. He was required to take a “fitness-for-duty” examination and go through random on-the-job alcohol testing for a year, and got a 14-day suspension without pay. That was changed in February 2018 to a 20-day suspension without pay and random testing for two years after he admitted to Gilberts police he had been drinking alcohol as a passenger.

Christenson and the Metropolitan Alliance of Police South Elgin 204 did not respond to requests for comment.

Christenson pleaded guilty to disorderly conduct in January 2018 and was allowed to keep his job. If he had been convicted of a felony or misdemeanor domestic battery, he would have had to resign from the South Elgin Police Department under his disciplinary agreement.

Christenson, whose annual salary is $92,623, has worked for South Elgin for eight years. He has no other history of complaints or discipline there. He was recognized in December 2018, along with another officer, for saving a resident’s life. 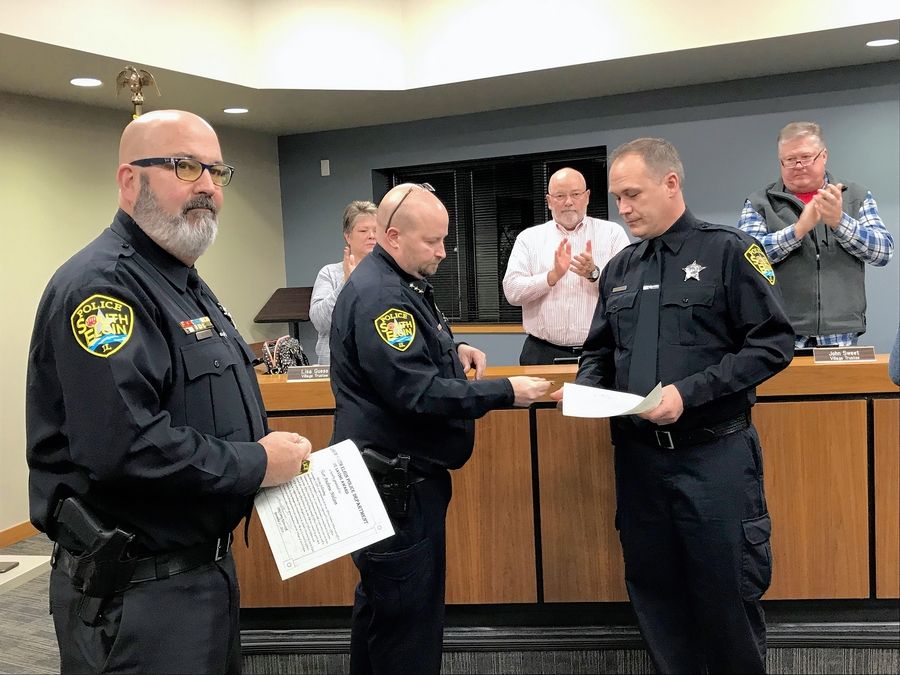 South Elgin police officer Shane Christenson, right, along with officer Andrew Nelson, left, was honored by Police Chief Jerry Krawczyk and the village board in December 2018 after the officers saved a resident’s life. Christenson is working under a “last chance” disciplinary agreement. – Elena Ferrarin | Staff Photographer

Christenson called 911 about 4:30 a.m. Jan. 13, 2017, from his Elgin home. During an interview with Elgin police, Christenson eventually admitted to pushing a woman in the throat, the report states.

Christenson was released and was banned from carrying a firearm except for work purposes; the judge allowed that over the objection of prosecutors, who didn’t want him to carry a gun at all. Christenson was required to check out his gun at the beginning of his shift and return it at the end, court records show.

Gilberts police said its only report involving Christenson is from a traffic stop at 4:40 p.m. Nov. 18, 2017, when he was a passenger.

Both Christenson and the driver, the woman who had accused Christenson 10 months earlier, told police they had been drinking, according to the report written by officer Steve Mueller. The woman was charged with DUI and Christenson walked away. The woman didn’t respond to requests for comment.

South Elgin police documents reference that traffic stop as well as another stop less than 24 hours earlier, also in Gilberts.

A notice of interrogation for Christenson dated Jan. 18, 2018, and signed by South Elgin Chief Krawczyk says the subject matter included “your operation of a motor vehicle during the evening of Nov. 17, 2017, or during the morning of Nov. 18, 2017, at or around 12:15 a.m., and events associated with you being stopped and questioned by Gilberts police officers during those dates and times.”

In an affidavit signed Jan. 22, 2018, Krawczyk wrote: “I have also become aware of fact suggesting that officer Christenson may have operated a motor vehicle on Nov. 17 and/or 18, 2017, while under the influence of alcohol.”

When asked how he obtained the information in the absence of a police report from Gilberts, Krawczyk told the Daily Herald, “We heard that he may have been stopped, so we checked into it.” He declined further comment.

When Gilberts police officers make traffic stops, they report them to Kane County Emergency Communications. Records show KaneComm logged a traffic stop at 12:21 a.m. Nov. 18, 2017, in Gilberts involving a vehicle with a license plate the Illinois secretary of state confirmed was registered to Christenson and a relative. 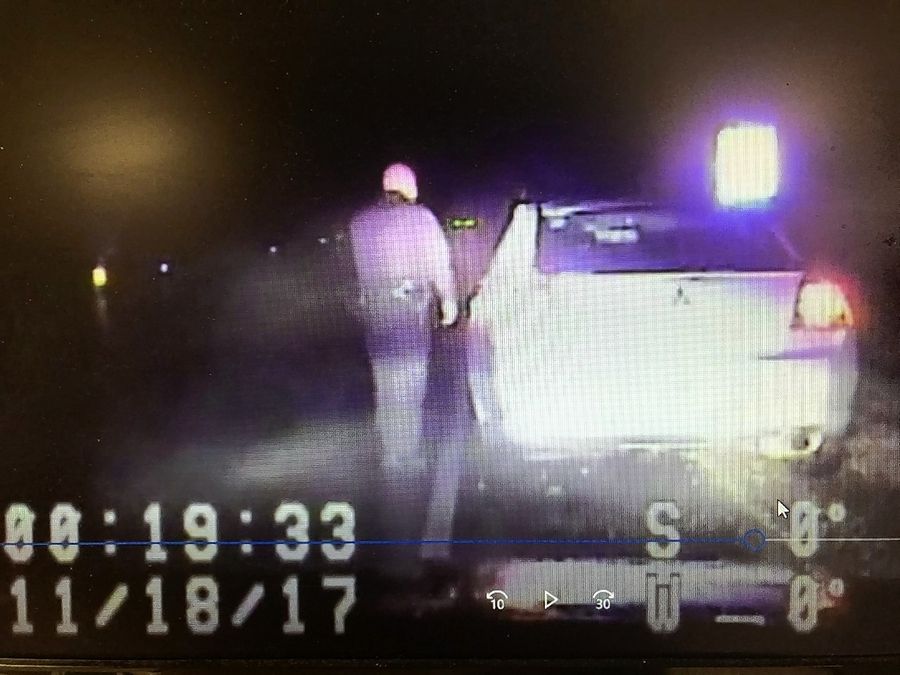 A car registered to South Elgin police officer Shane Christenson was stopped by Gilberts police in the early morning hours of Nov. 18, 2017, documents show. There was no police report or ticket issued after the 17-minute stop that involved two police squad cars. – gilberts police video

The Daily Herald requested police squad car video of that traffic stop, but the video provided by Gilberts police has a nearly 14-minute gap.

The video shows officers conducted a 17-minute traffic stop with two squad cars responding. A squad car pulls over a vehicle at 12:18 a.m. The officer walks up to the driver’s side and goes back to his squad car after speaking with the driver for one minute. The video ends, but the traffic stop isn’t over. 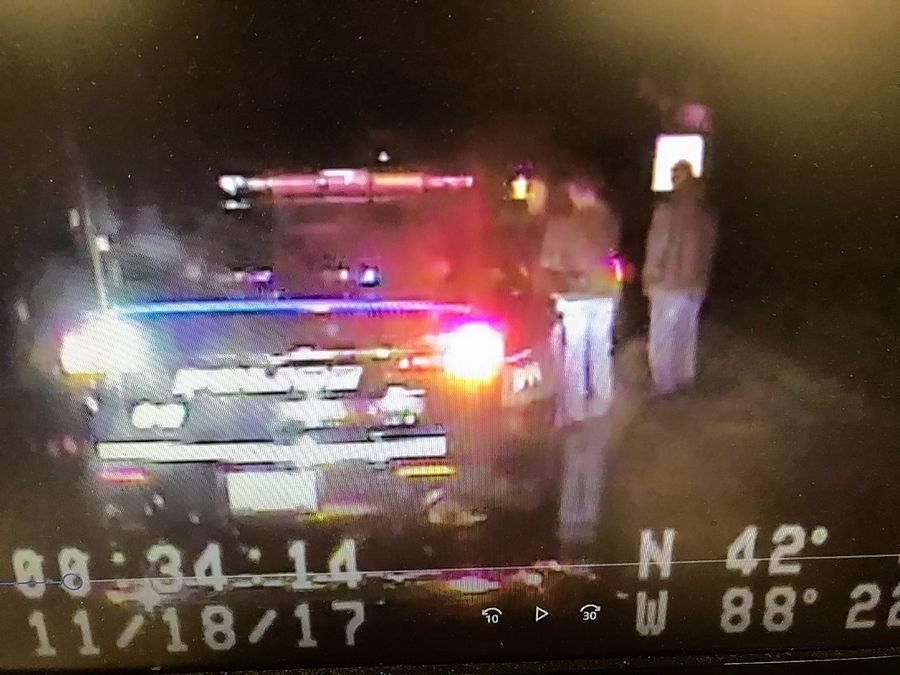 This image shows two men standing on the side of the road next to a police officer after a traffic stop Nov. 18, 2017, in Gilberts. The 17-minute stop involved a car that documents showed was registered to South Elgin police officer Shane Christenson. – gilberts police video

In a second video, which is too blurry to identify anyone, a squad car pulls up behind both vehicles at 12:34 a.m. Two men in civilian clothes and a police officer are standing on the side of the road; the second officer briefly talks with them. Three men get into the first squad car. The vehicle registered to Christenson leaves, although it’s not clear who is driving. Then both squad cars leave.

McMahon acknowledged his office eventually became aware of both traffic stops, though he wouldn’t say how.

Officer Mueller documented in a Dec. 30, 2017, supplemental police report getting a phone call from Kane County Assistant State’s Attorney Sarah Seberger. “The party that Kane County S/A office was interested in was the passenger of the vehicle that evening,” Mueller wrote. “I had no idea who Shane Christenson was.”

When asked about the decision not to pursue an alcohol-related bail violation and authorize the plea agreement for Christenson, McMahon said it was based on available evidence. “We tried to interview the other party for additional facts, but to no avail,” he said.

McMahon said his office learned in January 2018 about the traffic stop in which Christenson was driving.

“There were no reports. There was no way to verify that or obtain admissible evidence against him,” McMahon said.

Gilberts Police Chief Mike Joswick declined to comment on specifics involving Christenson other than to say, “There is no indication that any of my officers violated any department policies.”

As for general practice, “Normally, police officers do not write reports after traffic stops, unless an arrest is made such as driving while your driver’s license is suspended or revoked, DUI, reckless driving, etc. … The officer does have the option to write a report if he or she feels a report is warranted on other traffic stops,” Joswick said.

“Could it be a cop in Gilberts let him go because he (Christenson) is a cop in South Elgin?” Rossi said. “I can’t answer that question for you.”

Christenson pleaded guilty Jan. 26, 2018, to the amended charge of disorderly conduct in the domestic violence case, which allowed him to carry a gun without restrictions. Prosecutors dismissed remaining charges.

“If you go back and look at our track record, we don’t treat police officers any different. There’s no history of that,” he said.

Christenson was sentenced to a year of conditional discharge, a form of probation, and ordered to wear an alcohol monitoring device for 365 days and undergo domestic violence counseling. He also was assessed $1,447 in court fines and fees, records show.

Christenson completed 26 weeks of counseling in January and was discharged satisfactorily from probation.

Under his “last chance agreement,” signed by South Elgin and the police union on Feb. 5, 2018, he is still subject to random alcohol testing until February.

Gary Johnson talks about his book, with stories of him going to jail and defending a man wrongfully charged with killing Jeanine Nicarico of Naperville. Brian Hill | Staff Photographer Show photos & videos Burt Constable     Updated 5/17/2021 7:48 AM During more than four decades as an attorney, Gary V. Johnson of St. […]

In a recent article in the Aurora Beacon News, the Kane County Sheriff’s Department reported that a California woman is facing multiple felony charges in connection with a home invasion and domestic dispute in Aurora on Memorial Day. https://www.kcchronicle.com/2020/05/26/california-woman-charged-with-attempted-kidnapping-after-aurora-home-invasion/ai5thzs/ According to the article, the woman was attempting to take her 11-year old son away from […]

The expression “there is no better time than the present” was first recorded in 1562. The theologian John Trusler amplified the expression by adding that “…a thousand unforeseen circumstances may interrupt you at a future time. (Proverbs Exemplified, 1790)                 A little over 450 years later this expression holds even greater weight. With record high […]